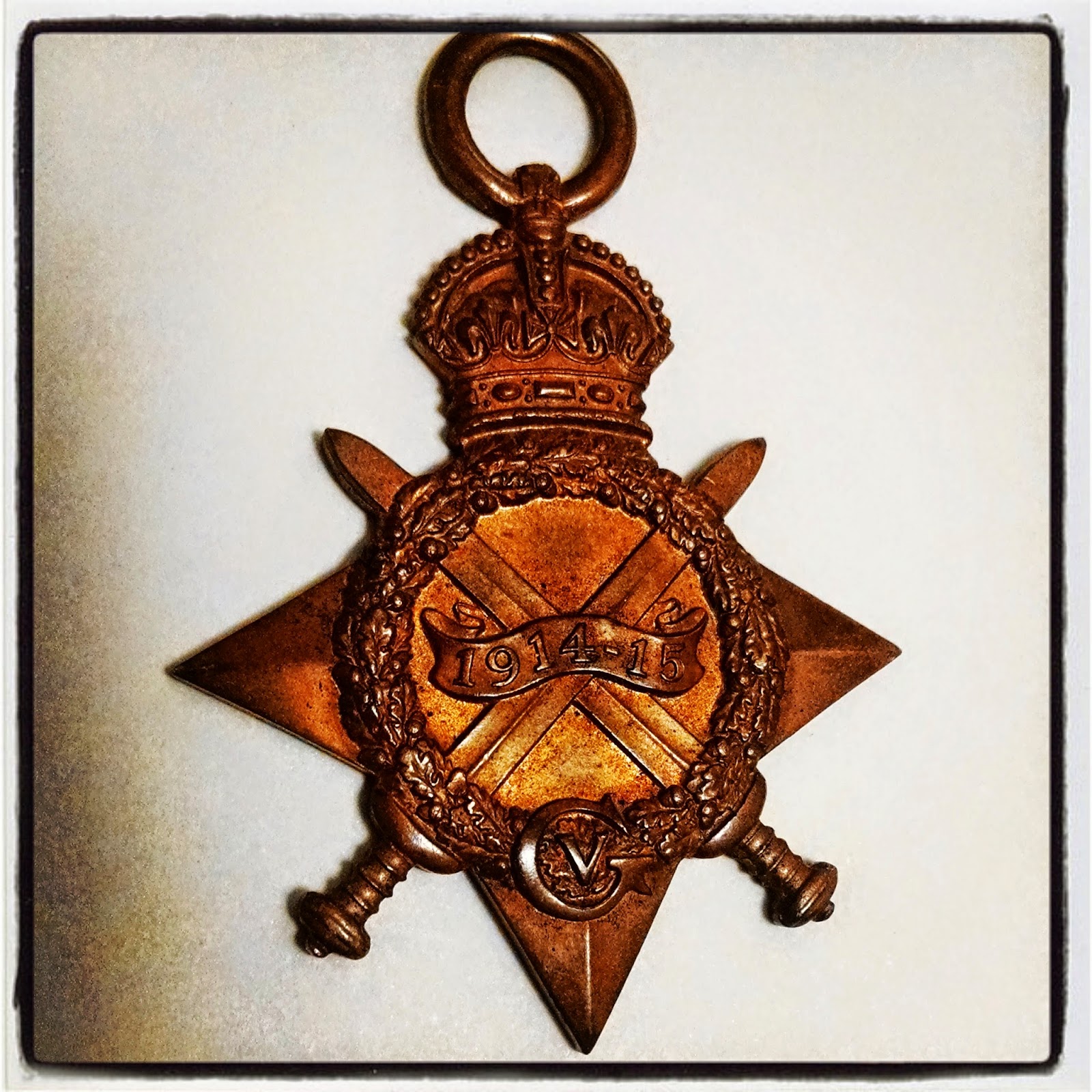 Today is the centenary of the beginning of the 1st World War.
The Great War.
The war to end all wars.

It is also the day when I woke to read that the UN (not for the first time) is demanding an urgent investigation into why one of its schools in Gaza (despite 33 reminders about it’s position) was hit killing 10 civilians and injuring dozens more by the Israeli Defence Force.

It is also the day when I discovered and signed a petition entitled: ‘David Cameron - Hold an inquiry into benefit sanctions that killed my brother’…

We live in frightening, brutal times at home and abroad…

It’s easy in the face of this to feel small, insignificant and hopeless.

But it’s also the day I woke up thinking about something hopeful. Something that happened this weekend, which got me thinking about the possibility and power of small interactions…

Because this thing that happened? It wasn’t a huge thing. It was a very small, personal thing. It was just a conversation between my Mum and myself …

My Mum is 85 and has developed some mobility problems. Because of this she now spends a lot of her time stuck in doors. I was over at her house this weekend to do a bit of shopping for her but mostly to hang out and chat.

During our chat we traveled from the mundane to the wonderful, the sad to the funny, and from the personal to the political. She is good company, being Endlessly inquisitive and funny. But it also must be said that there was nothing during the day that made me think I was doing anything other than shoot the breeze with my Mum.

But then just before bedtime...

Mum said out of the blue ‘Have I shown you my Father’s medal?’

I was taken aback really. We very rarely discuss her father.  I said ‘no’. She said ‘it’s on the top of the fire. Have a look if you like’.

I found a small brass medal with 1914 -15 embossed on it’s front. I’ve looked online and discovered it is in fact a 1914 – 15 Star Campaign Medal. 2 million plus were awarded in 1918 to soldiers who served. It’s not a gallantry medal. It’s just an object that says ‘you served, you were there’.

I held it in my hand.  I flipped it over. 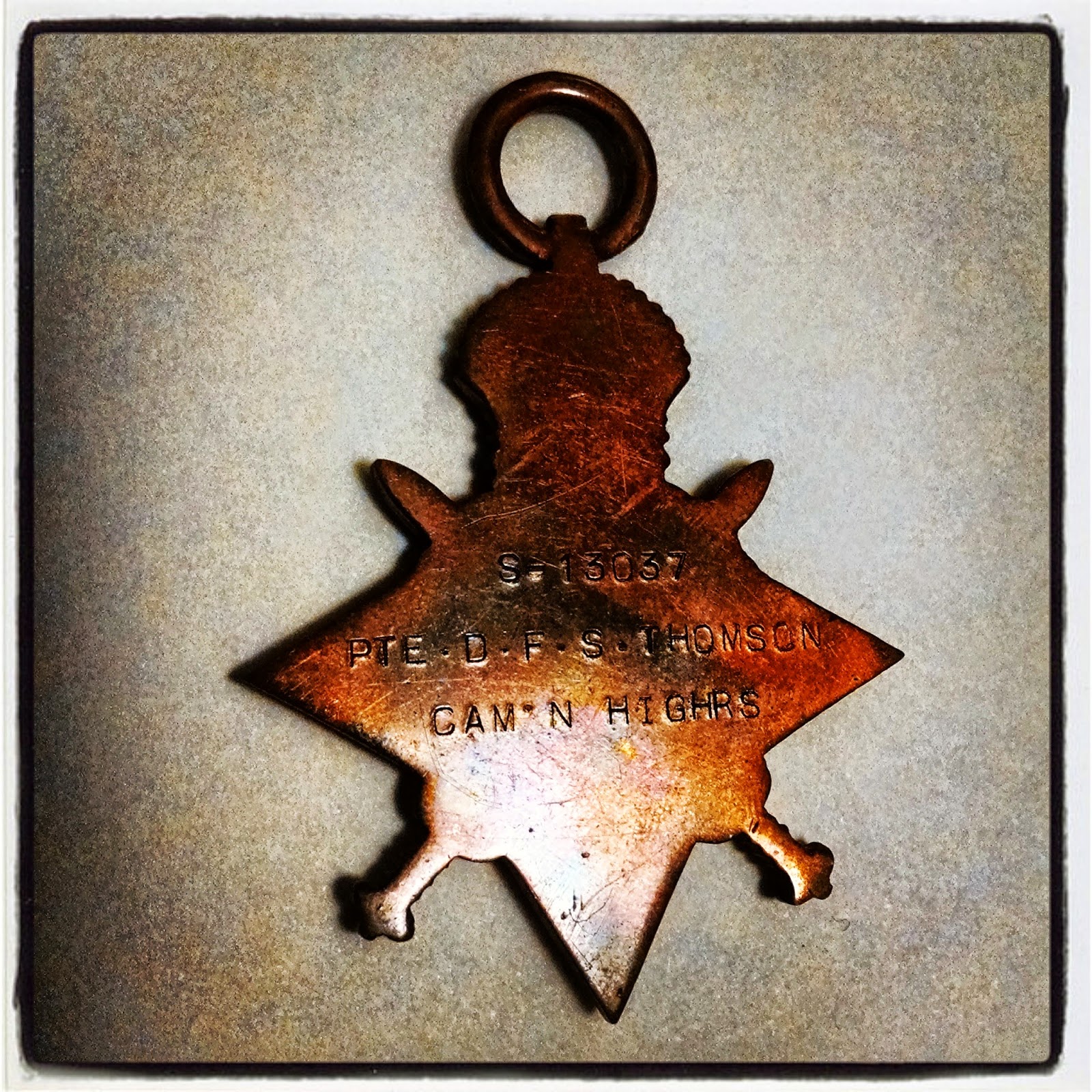 If you can't make the words out, here's what it says:

That’s it. But to have this in my hand felt suddenly really emotional. It is only the 2nd thing I’ve ever touched that has anything directly to do with my Granddad.

And as I sat there turning this medal in my hand, Mum went on to tell me everything she knows about her father. Some of it I had heard before. A few things were new:

Things My Mum Knows About Her Father:

1 His name was Donald Thompson
2 He was a Dr.
3 He was from Glasgow.
4. He fought in the Great War in the Cameronian Highlanders.
5. His arm was shattered in combat and this injury never entirely healed.
6. He died in 1932 when Mum was 3 years old, from septicemia. This blood poisoning slowly spread from the wound in his arm to his heart. Today antibiotics would have cured him.
7. He dreamt of being a composer and was an accomplished pianist. When his arm was destroyed his dream was shattered with it too.
8. My Mum has one memory of him. She remembers lying on a sofa with a perforated eardrum while he stood at the fireplace. In the memory he turns and he comes towards her.
9. My mum has one photo of her dad and the medal.

That’s the lot. That’s everything she knows. And most of these facts about him were things she gleaned from reading his obituary, clipped from a newspaper after he died. My Gaga (family name for Grandma) remarried after he died and found it difficult to talk about him to my Mum.

I suspect Mum got the medal out because she had been thinking about the W.W.1 centenary. But she didn’t say as much.  Getting it out and sharing it with me? That was a small act but a powerful one. Because this moment with my Mum has made a lot more sense of the idea of the centenary to me. Before, it felt separate from me. Something that the establishment is promoting / using to deflect difficult conversations about the here and now. Holding this little medal and having this conversation with my mum reminded me that it was and is more than that. (Though it may be a bit of the former too. Sadly.) And going on from this, this conversation going on into the night with my Mum made me remember the power of the personal. The moment when a bigger picture comes into focus and starts to mean something profound because of an illuminating connection. That's how we make sense of the world, so why is it that we often feel that the personal is no place to start when we wish to make change? In many ways you could argue it's the only place to start.

I almost didn't write the bit about my Gaga not talking about my Grandad. I thought it might make you not like her. Because I am assuming that you may be judging my Gaga for struggling to talk about my Grandad to my Mum? To be honest as Mum was telling me this story, I know I felt a bit like that... But I really loved my Gaga. I don't want you to think badly of her. She was in her buttoned up way a sweet heart. And it’s easy to judge. It’s especially easy to judge people by the standards of our own day. The death from an old war wound and then his strange erasing from conversation and memory by my Gaga is something I doubt modern mothers would do. But she did not live in a vacuum. She was born while Queen Victoria was still alive. She lived in the world of her day. A world, which had barely begun the journey toward understanding the subconscious let alone emotional literacy. Her world was a world that sanctioned the execution of young men with shell shock (Post Traumatic Stress Disorder - PTSD to you and me) for ‘cowardice and desertion’ for goodnesake. A world in which emotions were thought to be better  off repressed / hidden. A world in which she may have questioned what good raking over memories of a dead man would do, when her young daughter had a new father to focus on.

I will never know, neither will my Mum. What we do know is that a war shattered this man’s dreams and then slowly took his life. And the impacts for my Gaga and my Mum were profound.

So now times that by 37 million. That’s the number of casualties (deaths and injuries) recorded during the 1st world war.

That's what I found myself thinking about when I read that figure... Times the impact on your Mum by 37 million... It's impossible to imagine.

So this unexpected conversation has led me today to stop and take time to think of those men and women killed during the 1st world war. But most of all, today, I’ve thought about the ones, like my granddad, who survived. The ones who stumbled back, with broken bones and hearts. We tend to think about those who are injured as being the lucky ones who will recover somewhere in a neat hospital bed before returning to their lives. Perhaps this conversation with my Mum over the weekend has laid that lie to rest forever. There is no returning to how things were after going to war. The injured return bringing their broken bodies and hearts home with them. And the trajectory of their lives and their family’s lives are changed forever. In the act of remembering this, I also think forward and remind myself to care about today and tomorrow. I wonder to myself how many musicians will never play again after the bombing in Gaza because of shattered bodies? I wonder how many children will not know who their father’s were after another bloody day in Libya. I wonder how many of our living ex British service men, struggling with PTSD after tours in Iraq or Afghanistan, will get help to rebuild their lives when mental health care is being cut all over this country.

Most of all? I will remember that the world comes to us wherever we are. That we are shaped and also shape the world as we sit for hours in an armchair looking out at the street, or kill children by launching a shell at a UN school in Gaza or indeed struggle to write while tucked away in a cubby hole in Bradford.

The public and the private, the local and the international. The world and how to change it? It’s all right here, under our fingertips, in our conversations, in our friendships, in the moments when we're down the pub having a pint, or when we have a chat and ask 'how are you?'. It's in a protest march, in a letter to a newspaper, in a blog. It's in refusing to do something. Or joining in with something else. Its in the following of a dream when others have had theirs stolen from them. It's all there for us. Everyday. We have more power than we remember. We would do the casualties of the first world war and all those still living in war zones like Gaza tonight, a great honour if we remembered that.
Posted by Emma at 15:32