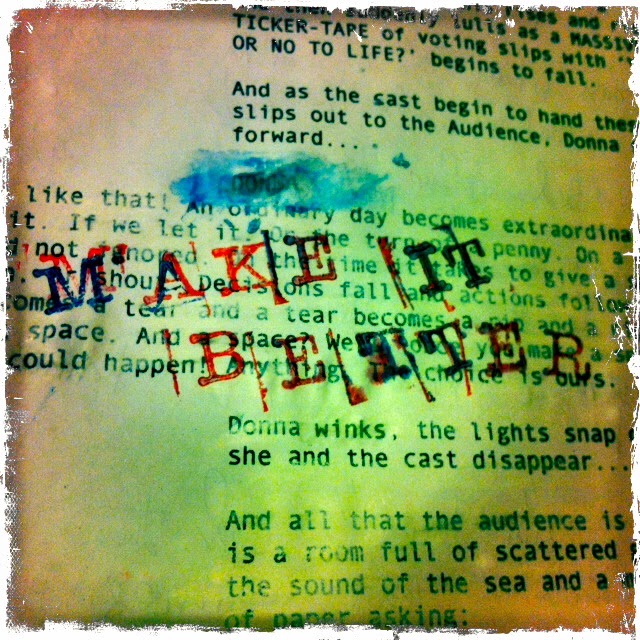 I’m redrafting my latest play, Home Sweet Home, for Freedom Studios.  I’m thinking about the layers and layers of decisions and thought that led to the first draft, and which have taken me to a point. This point. Even so, a first draft can only ever go so far. There is always a step further to be taken. So now I find myself into the real process of writing: the unpicking, erasing, rebuilding and adding.  I'm into the unfixed liquid moment between drafts. Wading in, still turning ideas. I’m thinking. Should I? I’m not sure yet. Should I? I’m thinking about the moments that will stay, the lines that will go, the new images that are forming. I’m submerging myself in it. Reentering. Refocusing. The hunt for something seamless and whole is on again. A seamless whole, with no loose ends, that will add up to something more than its parts. Something entertaining, fun, moving, exciting but thoughtful and different. Different but familiar. Fine tuning the tone. Making the right choice. Chasing the thing. This thing. Chasing it to nail it. Making a moment in time, a story that can mean something important to me and something important to you, if you come to see it.  And of course you can. You can come. I mean, they started selling the tickets for it already. So this feeling of being between worlds, it can’t last forever. The draft will be done. The deadline must be hit and the story will be told.  It’s an unstoppable thing, once you get this far in. It will happen because it must.

But there is something magical/frightening/wonderful/sick-making about this moment between drafts. This liquid state, when just for a moment all the layers of old, present and new thinking sit side by side...

Being this person who has been around and around this particular part of the world, I was aware of the Ukrainian Club in Bradford. There used to be gigs there, I think, when I was a kid.  I knew that someone from The Wedding Present (an iconic Leeds band from my youth, who I never much liked) went on to form The Ukrainians. So somewhere in my mind, I knew there was a Ukrainian community ‘here’, but in a vague way. I knew but didn’t know. And so, I had to go all the way to London last summer to meet Nina and Maria who have been living in Bradford for the last 50 or so years. Just a few miles from where I live. Have lived. Will live. To come across them. To register them. I was in London to spend time with the Entelechy Older Artists who were hosting this exchange... And then Nina and Maria started to tell their story. And their story was at once alien and mine. They mentioned places I know and where I go. They talked in a broken English that was peppered with Bradfordian words and vowels.  Sounds that only a Bradfordian makes. I can’t tell you what those sounds are, but I know them when I hear them. And so, to hear them speak these alien stories of the 2nd world war, in my home town's accent?  To hear their experience of becoming 'Untermensch', being stolen into forced labour as teens and losing everything? To hear them telling their story of surviving when friends didn’t. And then of coming here to start again… But never forgetting... The then and the now going on together... Well. Sometimes you have to go all the way to London to find out something new about the city you were born and live in. Ever since that afternoon I find myself thinking of our lives, Nina, Maria's and mine, going on, circling, layering, building up a shared experience, which I didn’t know we had. But it was always there. Discovering this is what began to make sense of the heart of this play for me... A play that is set in 3 city's in the UK at the same time. A play that has 8 unique stories which are all interlinked... A play that slips back and forth between the real and the magical...

I am thinking about all of this as I start the spitting, polishing, the head butting and swearing that will lead finally to the rehearsal draft of this play...

I’m thinking about the things in the script that are quantifiably true and the layers of magic and fantasy that sit side by side with all of this 'real' stuff now.  I’m thinking about the bits that came from nowhere. They just came. They just did. I’m thinking about the other plays and films and TV and music that I was thinking about while I was writing the first draft: As You Like It, Om Shanti Om, Daft Punk, The Tempest, Oh What A Lovely War, Live and Let Die, The Good Old Days and Camberwick Green. To a lesser or a greater extent, all these inspirations are alive in my play. I can see bits of Bradford and bits of London and slithers of Stockton. Everything jostling for attention. The jottings of scientists explanations, the half seen incidents, the smell of piss under Dettol, the cups of tea, the fear I felt whilst being approached by someone with later-stage Alzheimer’s for the first time. The smiles and sad eyes lifted to mine when I was interviewing. The memories entrusted to me by an incredibly generous stranger ‘because people should know’. The responsibility of that. The weight of that. And then the realisation that the only way to do justice to that responsibility was to cast off the weight of it. Otherwise I would never be free enough to write this fucking play.  This fucking play that I want to get right. This fucking play. With fuck in it. The fact that people do say fuck. People do. All sorts of people do. For all sorts of reasons. But in our feedback session last week, many of our older volunteer performers asked me to take the swearing out. Not comfortable with that. No need. Only, is there no need? I have to think about that carefully. The fact, that facts are debatable. Even when they’re not. For some people they are. And always will be. Under certain circumstances. Depending on. What? On things. On other things that have happened to us. That we have thought about. That sway us. That make certain untrue things more real for us than the real things other people see. The way that despite all of this, we long and search for a defined sense of meaning. Out of the layers and layers and layers of now and then and who we are and were, and who you are and were. Out of all of this, we still want to find a moment of clarity. A moment that makes sense. That from a certain angle, at a certain time allows all this palimpsest to somehow, even so, add up to a moment of truth. That is what a story is and why stories matter and why they can come as easily as breath yet can be as hard to nail as quick silver.