The Enough Project - 1 Day To The First Day Of Rehearsal... 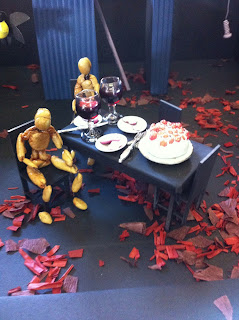 Today, The Enough Project is just 1 day away from going into rehearsal. This project, that started life in 2011 is finally on the brink of becoming a real, living thing out in the world...  For me and Cathy Crabb (my friend and fellow playwright working on this project) this has been an incredible journey...

It all started when we had a meet up in Chetham's Library, Manchester (the oldest public library in the UK) to talk about ideas. Specifically, we wanted to find a way of working with each other to challenge ourselves and to have fun, while also supporting each other to get our work up and out to a wider audience. Back in 2011 we were both in a bit of a work dip. It was difficult. Was there a way to support each other to write our way out of that?

I've been a fan of Cathy's work since I met her at a new writers development week held at Contact Theatre in the early 2000's. We come at things from different angles but I think our hearts beat to a similar,strange rhythm. We're both drawn to look at the darker side of life in our writing. We both find hope and relief in laughter. The style and form of our work couldn't be more different, but I knew we were kindred spirits from the moment we met all those years ago.

So, fast forward back to 2011... There we were at Chet's Library, nattering about the state of the world and trying to think about creative ways forward for our writing...

Cathy suggested we go and sit where Fredrick Engels and Karl Marx used to sit together in the reading room. There's a big old table in the alcove of the library where they both used to work. We decided we'd go sit there for some inspiration. Only, some damn kid got there before us. So, we had to hover near the table instead and sniff at history from a distance. Still, I like to think that just being in the reading room (bitterly staring dead-eyes at that kid, who no way needed to sit in the aura of Marx and Engels as much as we did) in some small way helped spark the beginning of the Enough Project...

Anyway that day, we talked and talked and talked. Life, work, everything... Up until the Enough Project the Pennines had been a big barrier for both of us. Cathy is based in the North West, I live and work in West Yorkshire. How could we break through and get work on all over the north? How could we get to write about what we cared about? We were a year into the Tory LibDem coalition, there was a lot to talk about - In terms of what they were doing - austerity - and what they were not doing - anything about climate change / jobs for youth / etc etc etc... We threw tons of ideas around... We were looking for a way to respond...And then we realised that the one thing that seemed to link everything we were talking about was captured in the illusive idea of the word 'enough'. This word just kept coming up. 'Getting enough work', 'how to know when you had taken enough?', 'the ecological implications of taking more than enough'...

That's how the idea for us to both write a 45 minute play responding to the word 'enough' came about. From there we agreed some simple rules: We agreed we'd initially write in isolation. We agreed we'd write for four characters, having first worked out their ages and genders, so that each play once written could be performed by the same company, on the same night as a double bill. And most importantly we agreed that the means would impact on the ends. We'd be frugal, flexible and we'd see what we could achieve together by working collaboratively. All for one, one for all. We were sitting pretty close to Marx and Engel's table after all...

The Enough Project was born...

That was the spark. From there it has just grown and grown. It's taken 2 years and a lot of work and a lot of patience. We applied for and got Arts Council funding that allowed us to write the 1st draft scripts and have read throughs / rehearsed readings at Salford Kings and Theatre in the Mill (we documented this initial process on the Enough Project website).

Cathy wrote Something Right which is set in working class Hulme, Manchester and follows brother and sister Jake and Maisie as they attempt to work out how to make sense of the hypocrisies of the adult world...When local self styled guru, Robin, arrives on the scene, encouraging them to drop out and fight the system, it's Jake and Maisie's Mum, Sarah, who steps in to try and get her kids to focus on keeping their heads above water in the real world... It's a battle for hearts and minds, but no one is prepared for the change Maisie is about to experience. The family will never be the same again...

My play Brimming is about middle class Monica and her husband Tony, a couple crippled by a cycle of emotional abuse and passive aggressive retaliation who are however bound together by the fear that the devil you know may really be the least-worst option...  The only thing they now both have in common is a genuine love for their daughter Anna... Both secretly fear that the only good thing they've ever achieved is bringing her up right... But Anna has been learning to love by watching her parents... The night we meet the family, Monica and Tony are hosting a dinner party for Anna and her new boyfriend Jonny. There may be trouble ahead.

Once people read both scripts they find it hard to believe that Cathy and I really didn't confer while we were writing our first drafts. There are so many mirrorings and symmetrical oppositions. I mean it really freaked us out too! Cathy's play is about big political ideas impacting in on a family and how ideology effects the decisions and lives of individuals. My play is about personal domestic politics exploding out from a family into the world. The plays stand alone but together they feel more complete and rich. This amazed me and Cathy. Serendipity had called.

After sharing the first drafts and with audience feedback ringing in our ears, we set back to work,  rewrote and then began the process of looking for a producer. With the support of Iain Bloomfield at Theatre in the Mill, Porl Cooper at the Lowry (now at Slung Low) and Dick Bonham at The Carriageworks (now at Little Mighty) we then found venues who committed to supporting a tour of our work. Now all we needed was a producer... Could we get a producer? We felt a bit out of our depth but we held our nerve and went for it... Which is when we approached David Edmunds at DepArts...  Once Dep were on board, that's when things really started to hot up for real... 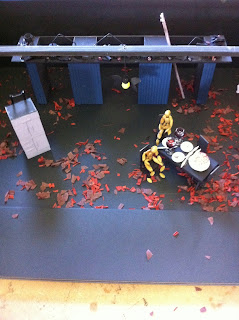 So! It's taken 2 years but here we are. We're just 1 day away from starting rehearsals with Alan Lane directing, Barney George designing and actors Lauryn Redding, Jo Mousley, Russell Richardson and Terence Rae forming the Enough Project company of actors.

All these people, working towards taking our work on a double-bill-mini-tour of the north that will be visiting Theatre in the Mill, The Lowry and The Carriageworks) this June.

We're on the brink of handing our dreams over to the Alan and the cast.  The first day of rehearsal is the day you've longed for and yet the day is a little sad too. It's where you start the process of becoming redundant in the room... In a way then, this moment, when the plan is finally hatched but the rehearsal process is still to begin, is the Cathy's and my peak in the making process... From now on, we will be letting go and watching what our plays become.

That's why it seemed like the right time to reflect. And it felt important too, to say the following:

1 - What a journey! Thank you so much to all the people who have helped Cathy and I progress the Enough Project from a seed of an idea to where we are now.

3 - To writers who may be in a shallow / dispiriting patch - Everyone who writes has moments when their writing seems to be going nowhere.  Don't give up! Things can and do turn around. There are ways to make things happen.

4 - If you want to warm your bottom where Marx and Engels used to sit, don't make the mistake Cathy and I made. Get yourself over to Chet's Library good and early.
Posted by Emma at 01:44 No comments: